A thank you e-card illustrated with a picture, addressed to you personally + your name will be credited in the supporters' list on the website.

Website template and PSD wireframes
A Web platform template theme, is a lite website template version of a pre-designed webpage or set of HTML5 webpages that anyone can use to “plug-in” their own text content and images, videos etc. into to create a website. A self contained zip file download.
Photoshop web platform wireframes, is a PSD format wireframe template a visual guide that represents the skeletal framework of 2D Photoshop platforms project file. That helps to save some valuable time of the design process.
+e-card + credits + digital poster.

With respect to the historical, visual and textual content of Europeana Collections, in particular the archives concerning the 18th-19th century as depicted in the Balkan Peninsula and more precisely the territory that formed the post-revolutionary Greek state, we present the following proposal:

The creation of an online web platform used to view, share and discover 2D and 3D content online, based upon Europeana openly licensed content, providing an innovative educational tool focused to a European and global user audience. The main idea of this project is to reuse Europeana’s content, based on the pre and post revolutionary period of the Greek War of Independence.

The online web platform provides an educational community portal where users (students and teachers) communicate with each other, while they explore the educational materials. This online platform can be used as a standalone, as well as a supplementary educational tool, in parallel with MOOCs.

The online web platform functions as an active participatory media to approach the cognitive field of history. Pupils and students will be able to compare the content of 2D representations and 3D simulations with other sources and discover the structuring of the historical narratives.

The added value of the online web platform is related with the educational use of the Europeana Collections at a European level. Teachers and tutors will be able to use freely the content, create seminars and test students according to the embedded material in the platform. 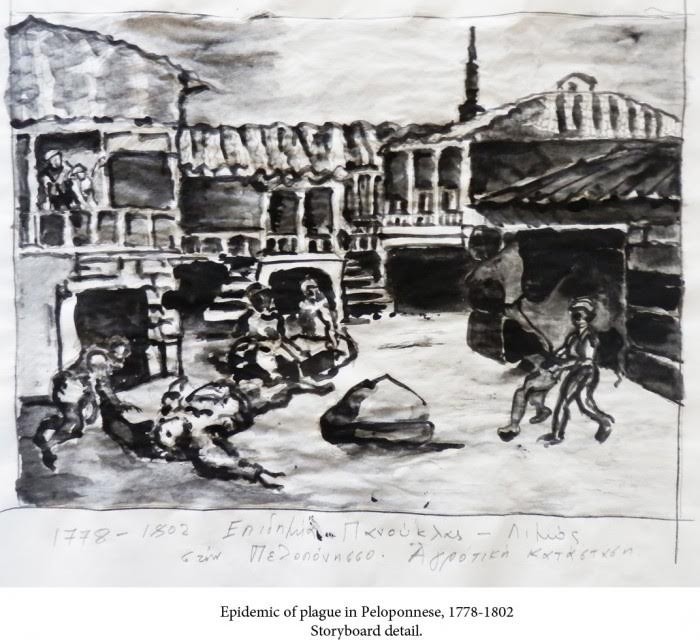 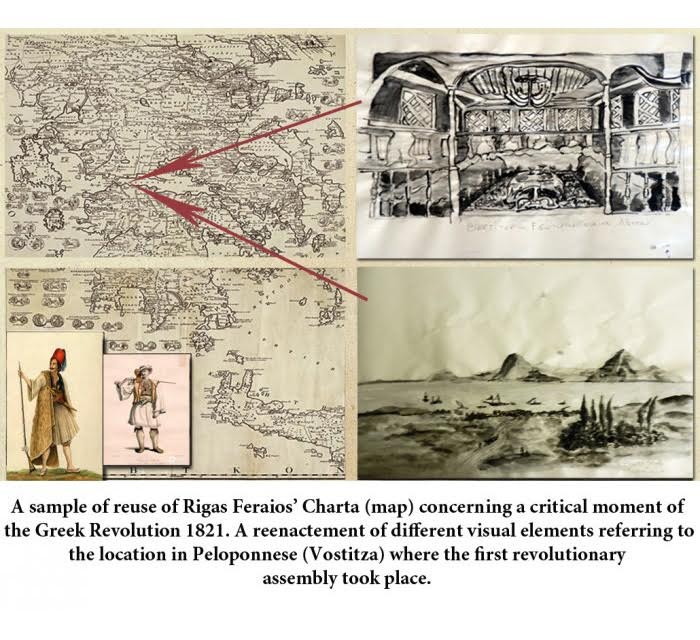 The platform’s content will mainly draw upon Europeana visual and textual collections regarding the history of the Greek Revolution, and other relevant digital elements, which are available and reusable.

This online web platform is a learning interface, characterized by the application of the Europeana content, text and images into reuse through 3D props, characters and environments. Visitors to the online platform (teachers and students) can move freely around or within 3D scenes, engage in discussion and download 3D models, with the option of 3D printing of compatible models.

The online web platform provides an educational community portal where users (students and teachers) will have profile pages, communicate with each other while they explore the educational materials. This online platform can be used as standalone and as an additional educational tool, in parallel with MOOCs.

In addition, this platform will host 2D concept art narratives through a parallax scrolling storytelling website. These 2D concept art narratives will be drawings in the form of a storyboard based on various visual and textual sources from Europeana collections. The storyboard can serve as both an artistic educational tool and a guide to develop various media derivatives, such as films, video games and animations.

The parallax scrolling involves the background images moving at a slower rate to the foreground, creating an illusion of depth in a 2D scene adding to the immersive experience.

The platform will be leveraged as an innovative tool targeted to both secondary school students (11-18 age group) and teachers. Students will be able to interact, examine, observe and reconstruct the features collected and developed. In addition, teachers will be able to create a series of educational scenarios based on the platform and the visualization of usually neglected aspects of historical interest, such as everyday life, material culture, the natural and built environment.

The platform will enable viewers to move freely around or within the 3D scene and parallax scrolling website, using mouse and touch manipulation, designed to contain the main elements of a game-based rationale, which trigger the users engagement through an immersive and active learning of history.

The Europeana match funding call for the reuse of Historiana material coincides with the beginning of a new project: Personal Cinema and its collaborators are planning the creation of a video game on the Greek Revolution of 1821. This game combines the teaching and learning of history through the medium of a digital video game. As such, the game will provide a series of tools, which will engage students with a historical context, while making sense of the notion of game play.

The idea is to leverage the digital content provided by Europeana regarding the Greek Revolution with the design of an online web platform. This platform will involve 2D and 3D online content from Europeana collections, enriched with relevant open digital content contributed by other organizations, while providing an alternative educational tool. This platform will leverage a historical context concerning the Greek Revolution, which constitutes a landmark in the history of Modern Greece. It is also part of a broader process of transformation within the Balkans, Mediterranean and Europe.

More specifically, the significance of this historical context contains:
• Densification of communications, flourishing long-distance trade, consolidation of monetary
and mercantile economy, in parallel with the emerging national bourgeoisies.
• Decline and modernization in the late Ottoman Empire.
• Shifting geopolitical balances, after the Russo-Turkish and Napoleonic wars.
• Dissemination of the Enlightenment and the ideas of the French Revolution among Christian-
orthodox elites, interaction with ideological currents in Europe (liberalism and romantic
Philhellenism).
• Spreading of national liberation movements in the Mediterranean and the Balkans.

The textual and visual sources concerning human geography, the natural and built environment, material culture and folk traditions of various ethnic groups living in Greece during the pre and post revolutionary years, constitute appropriate material for the main themes of Historiana such as:

In the short term, the project’s principal goal is the creation of an educational platform that provides students and teachers with a tool for an innovative and playful approach to European historical heritage. In the long term, the aim is to bridge the educational aspects embedded as 2D and 3D elements in the platform, with the playful characteristics that forms the gameplay design of an historical videogame.

In addition, this project will be useful for research purposes, such as universities and research centers related to history education.

This means that the platform will be useful for teachers who can create their educational scenarios, and test their methodology. The platform could be used as a tool for designing MOOCs for distant learning, or sharing educational lessons regarding the Greek Revolution and its impact on Europe and the world. As a long-term goal, this platform will be used as a basis for constantly generating new material to be applied into the frame context of the historical video game, creating sustainability for future use.

Personal Cinema is a network active in the field of media arts. It plans and organizes projects and activities that encourage the critical stance towards the new forms of production, presentation and distribution of audiovisual products. It is a collective active since the year 2000, producing social-political videogames, multimedia works, documentaries, organizing events and lectures on topics such as the Balkans, web.2.0, migration flows and their connections to digital networks, research and the creation of simulations on the topic of logistic worlds and logistical cities.
http://www.personalcinema.org/

Dimitris Cosmidis is an independent social scientist. He completed his undergraduate studies in Political Sciences at Panteion University (Athens - Greece) and he holds a Master’s Degree (DEA) in Post-Byzantine History from Paris I University (Sorbonne) and a Master’s Degree in Social Anthropology from the University of the Aegean (Greece). He has worked as a researcher for the Historical Archives of The National Bank of Greece and in several research projects concerning Social History, Cultural Anthropology and Ethnomusicology in Greece, Turkey and France. He has been Editor in Chief of National Geographic Magazine (Greek Edition), Head of Publications Department of State Theatre of Northern Greece, Head of Editorial Department and Artistic Consultant of Skopelos Centre of Photography, Thessaloniki Museum of Photography and State Museum Of Contemporary Art, Thessaloniki. As a professional translator and editor (French to Greek and English to Greek) he has been collaborating with several Publishing Houses on editions concerning History, Art History, Philosophy, Human and Social Sciences, as well as with the Greek Festival S.A. (Athens & Epidaurus Festival). He has been awarded a grant for translation from the Centre National du Livre (France).

Theodoros Giannakis is an artist. He studied Painting, Sculpture and New Media in Athens School of Fine Arts. In 2012 completed his MA in Digital Media and New Media Management at the London Metropolitan University. From 2017 he is Ph.D. candidate in the ASFA. He has participated in international exhibitions such The Equilibrists, Benaki Museum, Athens 2016, Y.H.A.U, Komplot, Brussels 2016, Heir of the Greek Catastrophe, Parallel Vienna 2015, A Fresh, National Museum of Contemporary Art, Athens 2013, Young London, V22, London 2012, Neoerotica, Action Field Codra, Thessaloniki 2007, What Remains is Future, Arsakeio, Patra 2007. Alongside his artistic and curatorial activities, he has been active as an art director in indie films and digital advertising. He has held the position of Digital Media Manager at the digital department of Art Galleries and Auction houses for the fine arts, while at the same time he has worked as an art director, game designer and 3D generalist in video game production for Alten8 in London 2013, UK Human Head studio 2012, University of Western Sydney 2015, ELPIDA foundation 2009 and in collaboration with MIT researcher Konstantinos Tsakonas, 2008. He is a founding member of the artistic and curatorial team KERNEL. They have curated projects such as Word of Mouth in the 3rd Athens Biennial 2011, BYOB London, The Woodmill, London 2011, and Full/Operational/Toolbox, M21, Athens 2010, and solo exhibitions such as Polansky Gallery, Prague 2016, Union Pacific, London 2015, EMST, Athens 2013, SPACE, London 2013.

Ilias Stouraitis is currently a Ph.D. Student in Historical Culture and Digital Games at Ionian University in Greece. He completed his undergraduate studies in History and Archaeology at the University of Athens in Greece and undertook a Master’s Degree in Modern Greek History at the University of Athens. He has taught History in private education in Greece and has worked as a researcher in several European and national surveys concerning history, education and games. He has been awarded a grant from the Japanese Nippon Foundation SYLFF (Sasakawa Young Leaders Fellowship Fund) and an award by Common Ground Community 'The Learner'. His main research interests are: History Education, Historiography, Historical Culture, Design of Educational Software/Games for History and teaching/ learning history with Digital Technology.

The project will be useful for research purposes, such as universities and research centers related to history education.

This means that the platform will be useful for teachers who can create their educational scenarios, and test their methodology. The platform could be used as a tool for designing MOOCs for distant learning, or sharing educational lessons regarding the Greek Revolution and its impact on Europe and the world. As a long-term goal, this platform will be used as a basis for constantly generating new material to be applied into the frame context of the historical video game, creating sustainability for future use. The content of the platform will be available to the public through an open license (In accord with Europeana).