With this contribution you collaborate in a solidarity way in the project and enter the draw of a Pack Potrer: T-shirt, bag and a homemade bread bar. 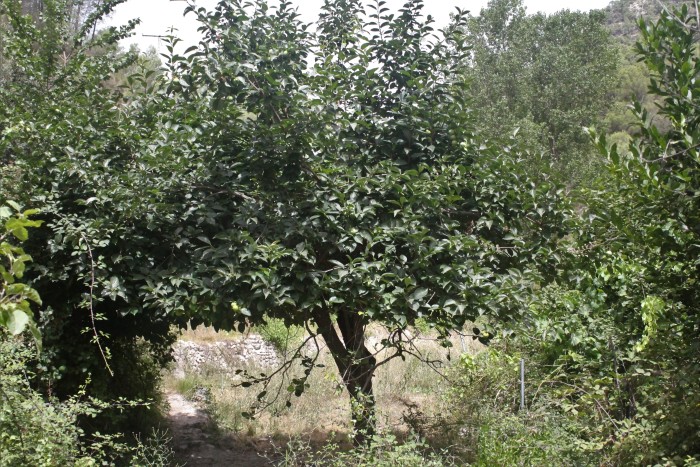 Fabric bag made with 100% organic cotton printed in the screen printing workshop of the CSOA Ca'ls Frares d'Alcoi
.
If you wish, regardless of the reward, your name or that of your entity will appear on our website. 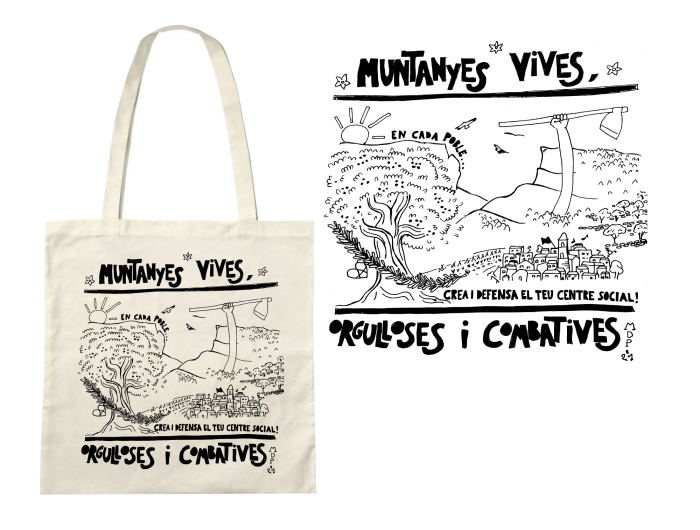 This is the outline of the design that we will print. We are perfecting the idea and, in short, we will upload finished models.

Self-styled print according to the linocut technique with black ink. Made by @saretat. With the print, you enter a draw for a participation in a bioconstruction course to be determined. T-shirt made with 100% organic cotton and printed in the workshop of the CSOA Ca'ls Frares d'Alcoi. 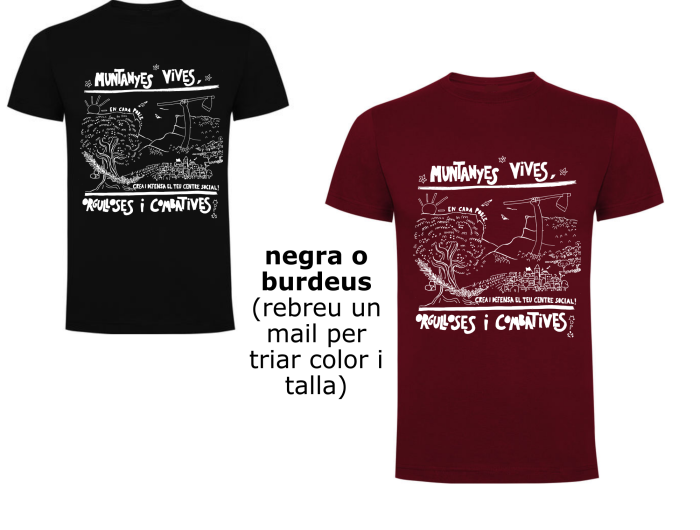 This is the outline of the design that we will print. We are perfecting the idea and, in short, we will upload finished models.

It includes a fabric bag and a t-shirt made with 100% eco-friendly cotton and printed in the silkscreen printing workshop of CSOA Ca'ls Frares d'Alcoi. 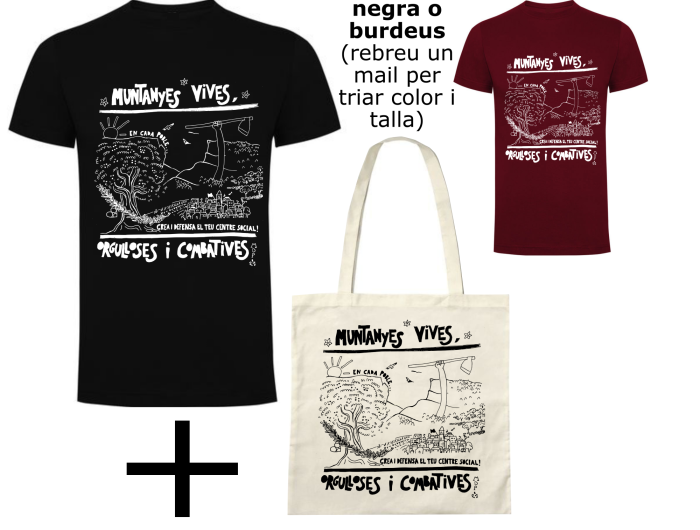 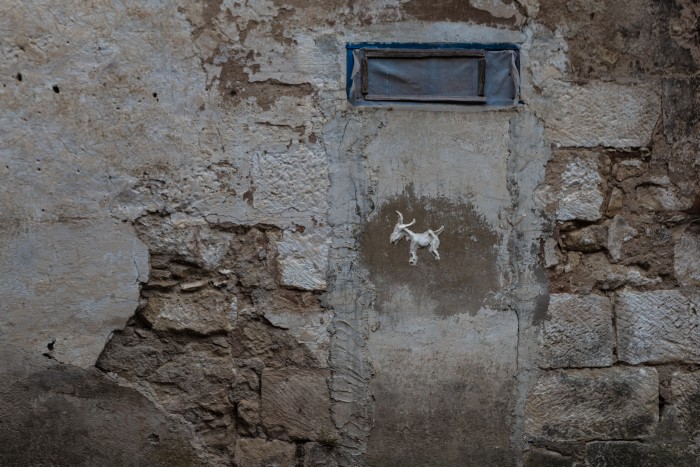 Get to know the project

Participation in a bioconstruction course during a weekend in the spring-summer of 2022. Meals and overnight accommodation are included. Groups are limited to 10 people. 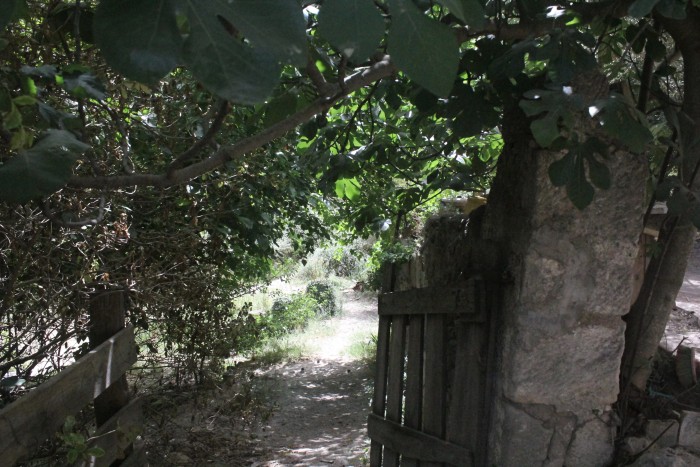 With the bakery subscription, you will have a weekly distribution of 1 kg bread for 4 months. Pick up at an exact place and time in Alcoi or surrounding villages. 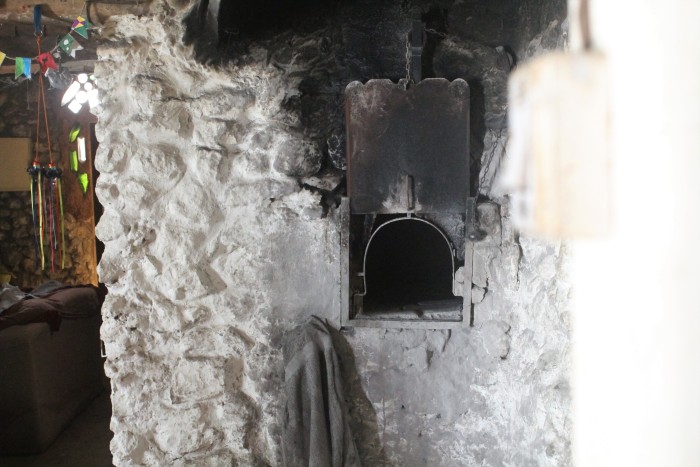 It is a solidarity and symbolic contribution for individuals and groups with which one of the many terraces that run up to the rocks would be given the name they like. The name will also appear on our illustrated map of the Mas environment. 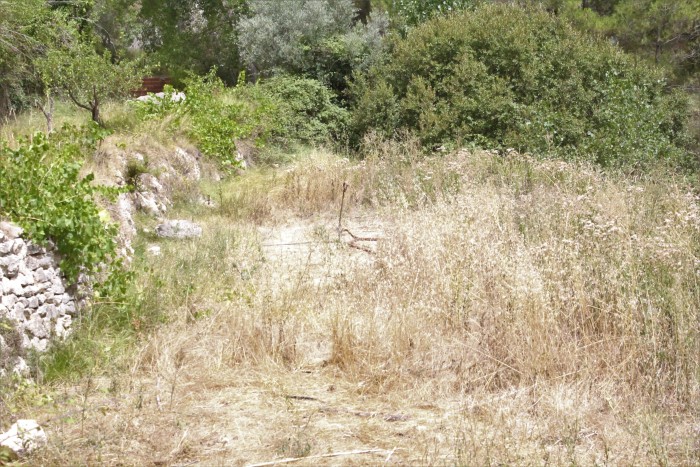 We propose a stay of two nights with all meals included in the Mas del Potro. You will be part of the project and you will be able to enjoy the environment, especially if you are familiar with mountain hiking or climbing.

This reward includes * groups of one to four adults (girls and boys who wish).

The date, which would be chosen by consensus, would be 2022.

*Unfortunately, the space does not allow access to people with reduced mobility because the Mas does not have access to motorized vehicles. 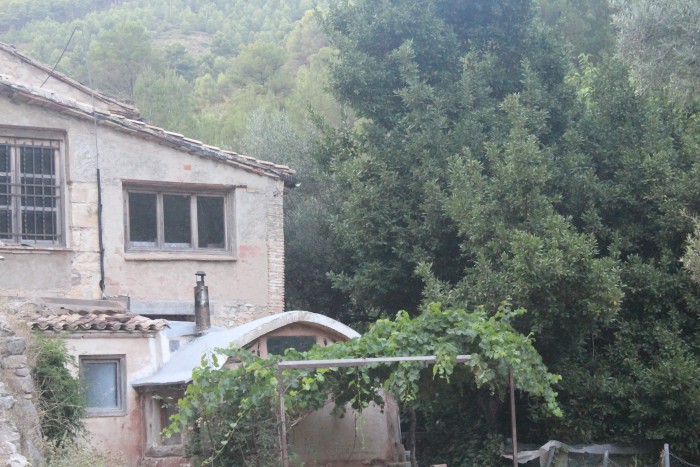 It is the reward with the greatest financial amount that we propose. The Catapult is aimed at those people or entities who believe in the project and want to promote it. You will be made a memorial tile on the walls of the Mas, if you wish.

In addition, as an addition, you will receive a basket with seasonal products from our harvest. 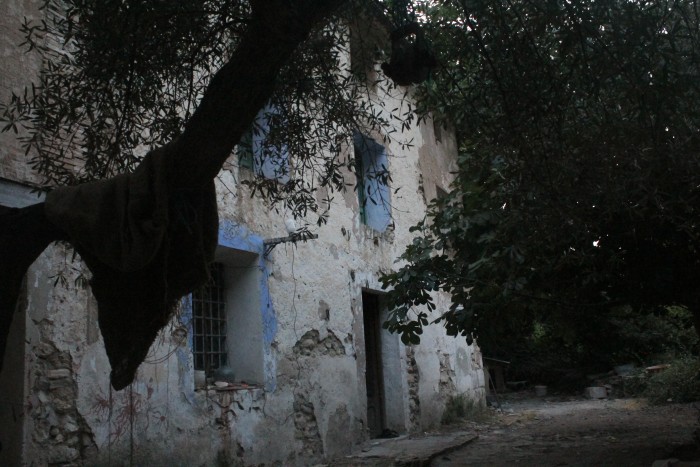 We want to create a learning space that hosts culture, agroecology and transition towards new ways of doing and living based on rurality.

Thanks to this Goteo we would like to give continuity to the collective project of Mas del Potro located at Barranc del Cint (Alcoi) and iniciated around 2001 by a group of young activists from Alcoi.

This group, together with a commited community of Mas del Potro supporters and friends, has rebuilt the house from the ruins, prepared the pieces of land and given the enviroment the best amenities for inhabiting the place in a continuous and self-managed way.

Twenty years later, this first period comes to an end and we are taking over.🌱🌿 A meeting point and a place of synergy between agroecology, decentralized culture and social action:

We project the space as an excellent location for developing workshops, activities, courses and meetings which promote agroecology, food sovereignty, enviromental caring and development of networks between people.
We have a library, a workshop and a big room for hosting visits; together with different spaces with potential to host meetings, talks and trainings, both inside and outside.
*There are plenty of cultivation terraces set with driping irrigation and pens asking to be filled with live.

All of this, from a political positioning based on horizontality, ecofeminism and self-managment; welcoming all sexual, gender and affective diversities.

We want to ensure a time-sustainable project

That's why we are interested in facilitation of group processes and community based actions, taking into account allied people and entities together with the residents of the house. Pedagogy, groups gestion and accessibility are the tools we consider most important to pass on our concerns, as well as promoting the onset and consolidation of other iniciatives and people, both in the Social Center and the housing project.

In order to achieve this, we contemplate the possibility of creating a housing cooperative to focus energies on taking care of the house and cultivation lands, developing a lifestyle opposed to the prevailing dogma of individualism and private property. 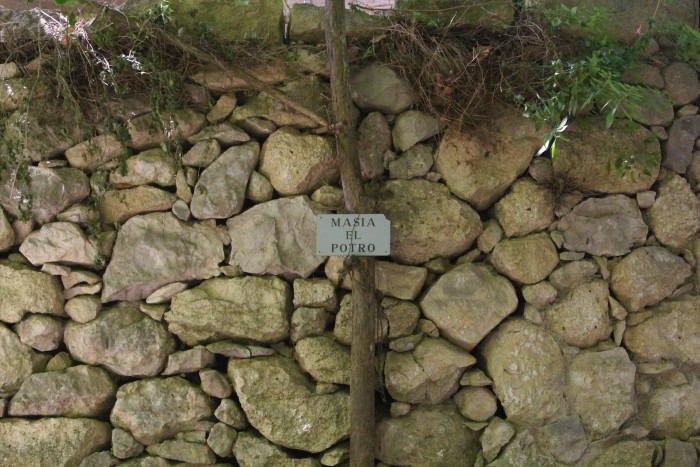 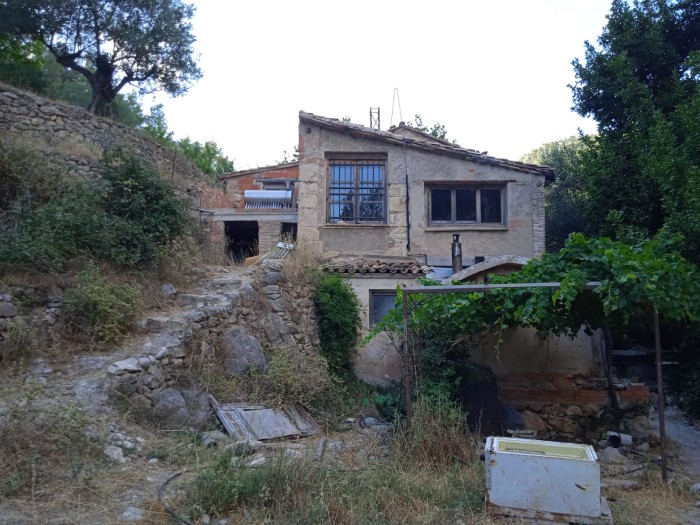 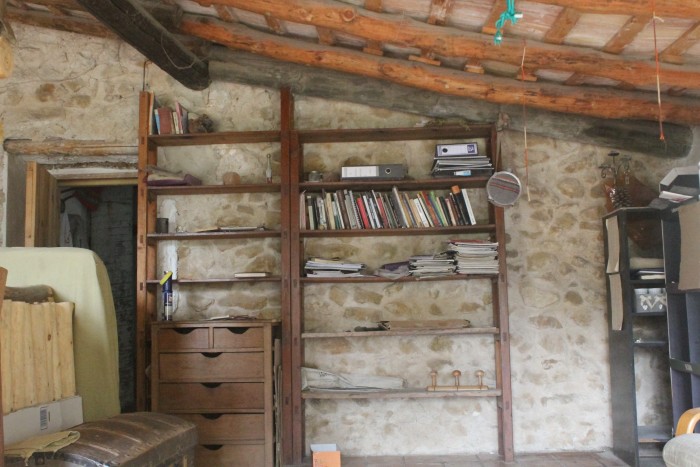 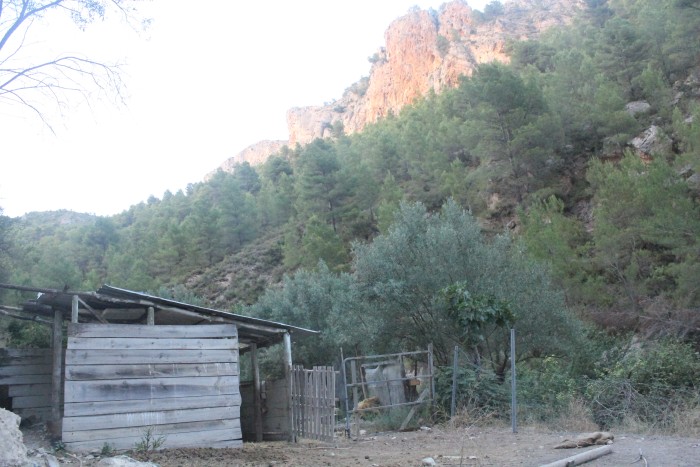 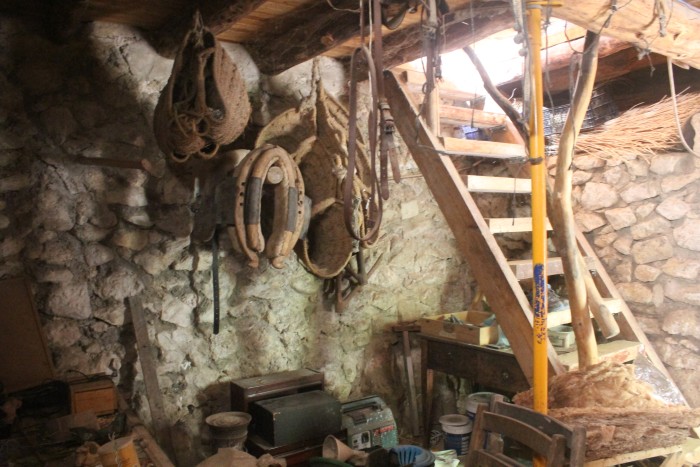 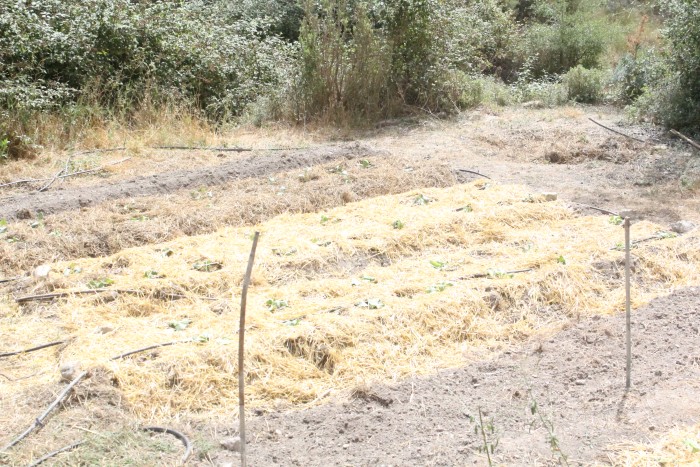 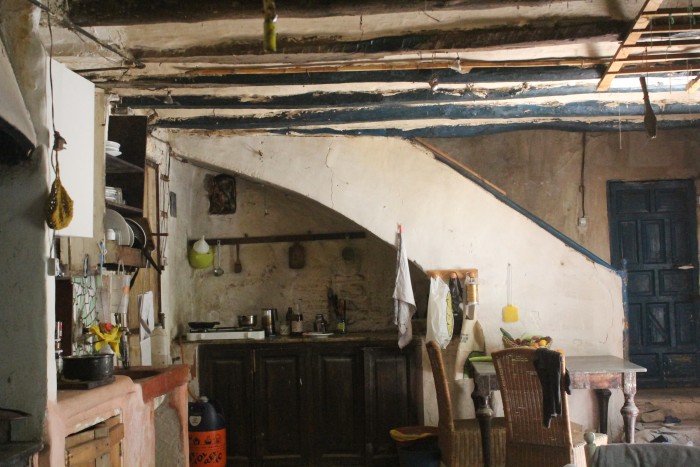 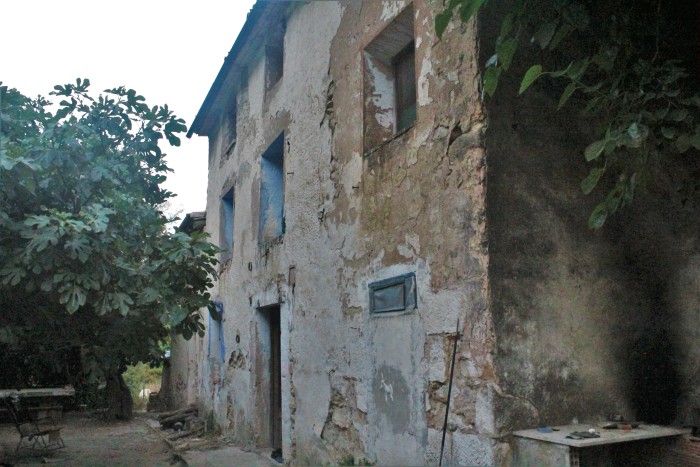 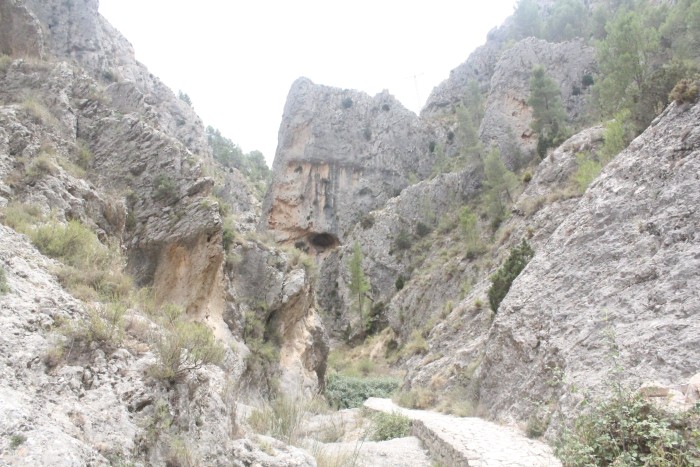 🌿 As we had to put into words the goals of the project, we have followed the four dimensions that many projects concerned about social transformtion have previously followed:

🌿 From these dimensions, we understand as some of Mas del Potro's goals: Our motivation is to live in a continuous contact with nature, creating a community of people who freely has chosen to live and organize themselves without any hierarchy, willing to put their energies and time on working the land with the less possible impact on the ecosystem. That means commiting on respecting the enviroment, flora, fauna and people inhabiting the land.

We leave the door open to whoever feels like learning about the project or take part in it; always keen to re-think it from the consensus of those involved.

Right now we are three friends that have chosen to take the reins of the project and guarantee its continuity.

The co-initiators are: Sare, Roger and David. We are three youngsters form El Comtat whit different kind of experiences in similar projects.

Sara studied Art History and Sociology in France, together with a master focusing in Arts and Society in Barcelona. After participating and arranging communiy projects in southern France, involving in cities' social fights and collaborating with collectives (mainly in Athens) she gets interested in decentralized socio-cultural and artistic action and the rural memory. Roger with deep interest on agronomy, botany and food transformation. Moved by alimentary sovereignity, farmer's dignity and LTBIQ rights, takes part in social movements around the País Valencià and differents parts of the geography, nationaly and outside the territory. David has been linked to live in the country-side since he was a kid. During his studies he got the chance to live in different cities, either in or outside the Spanish territory. Carrying political and social concerns wherever he's moved to, he has tried to shape them throughout the studies, experiences, and the encouragment that contact with others bring. As collective experience, all three of us are members of APOC (Acció Política del Comtat), young but ambicious project created in order to unite our energies towards the self-sufficience of our villages and creation of cultural and leisure spaces where we could feel safe. Right now, the project that's still running is the garden ACABassaes, in the town of Alcosser.

We are between 22 and 23 years old. As young people we are aware of the difficulties of our generation -precarious- in order to obtain economical resources and undertake initiatives. That is why we need help, networks, collaboration... We know we can do it, and if we get to do it, it has to be the right way!

We see ouselves with the strength, the hope, the motivation, and the capacity to carry out this project. Right now we are in three, but the door won't remain closed; one of our objectives is to create a community of commited people, an experimental space of shared lifes inside the Barranc del Cint.

We will grow according to our rythms, timings, meetings and coincidences...

The Mas del Potro stays and it will be in a collective way! 🌿

Our social commitment will be focused on agrorural development. Not understanding development in terms of growth, extractivism and exploitation; understood as a way of dignifying rural enviroment inhabitant's life thanks to sovereignity (food, energy and culture). Said this, we comprehend this social commitment as a way to facilitate and share a social and ecological transition. 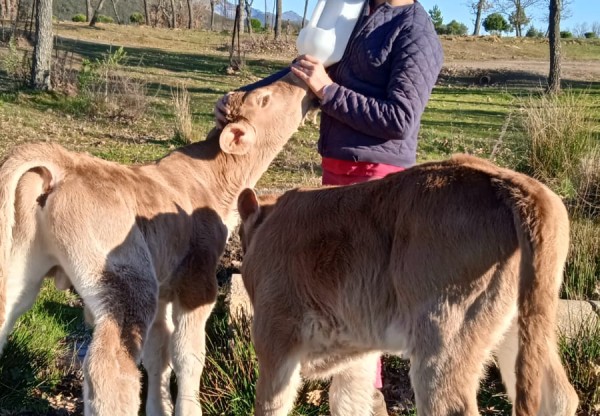 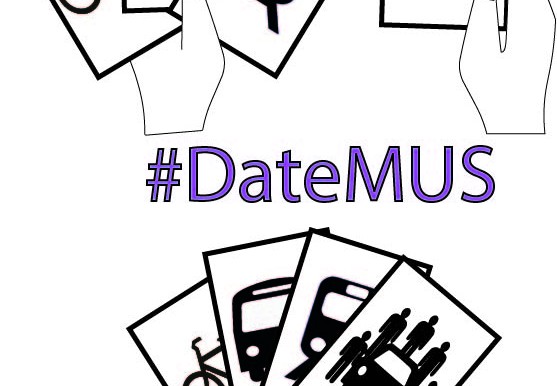 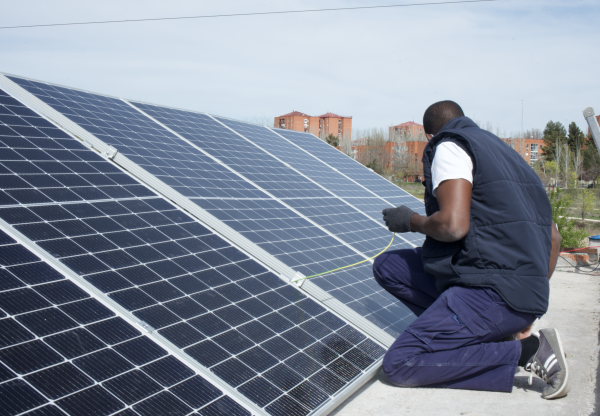